TRACE THE JOURNEY OF
MOLINA CHAI

Have a look on the map to discover
the origin of our ingredients. 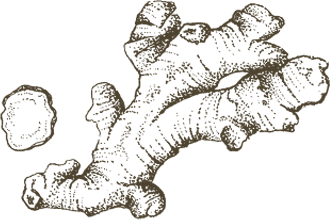 Ginger
Ginger is a spice with a very warm and spicy taste originated in Southeast Asia. Its history dates back 5000 years when this spice was incorporated into the Ayurveda and traditional Chinese medicine thought it to be a luxurious tonic that could eradicate many ailments. Soon after, it became widely cherished in the Mediterranean regions, not only for its therapeutic properties, but also for its exclusive lemon-like aroma as well as its biting taste. We import the best dried ginger from Nigeria. 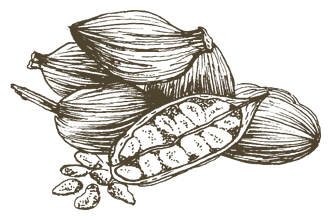 CARDEMOM
Cardamom is an extremely strong spice which is indigenous to India (Malabar coast) with numerous health benefits. It delivers a taste of pure delight to the Molina Chai. A member of the ginger family, cardamom follows saffron and vanilla on the list of most expensive spices. The harvest is labor intensive. Grown on plantations, primarily in India and Guatemala, the tall plant flowers for 8 or 9 months of the year to produce green pods. Cardamom, known as a natural detoxifier, helps to eliminate toxins out of your body. 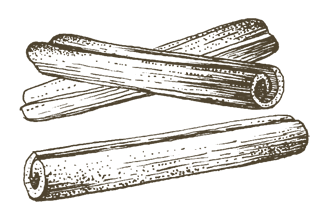 CINNAMON
Cinnamon is a fragrant and slightly pungent spice that originated somewhere in Sri Lanka. It has a long history tracing back to 2000 BCE. The spice is actually the inner bark of a tree known to have great benefits for the digestive and immune systems. It has always played an important role in the Ayurveda and traditional Chinese medicine, its powder utilized not only to give meals a great taste, but also to reduce cholesterol levels and treat infections. These days, we use Cinnamon cultivated in China to offer our clients the best flavor. 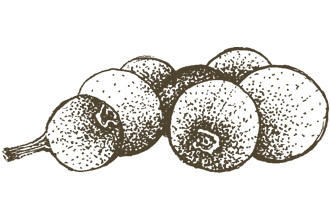 ALLSPICE
Allspice is a spice with a very exclusive name particularly due to its taste that resembles a combination of all spices such as cinnamon, cloves, nutmeg, ginger, etc. It is cultivated in the Western hemisphere in the rainforests of South and Central America. Mayans used it to make chocolate whilst the Arawaks used it to make mincemeat. Unfortunately, this dried unripe fruit is not very popular in Europe, particularly because of the failed attempts at transplanting its production to Eastern regions. Even so, allspice is nowadays an indispensable ingredient in many households that is both flavorful and healing. The world’s greatest supply of allspice comes from Jamaica, and that is why we make sure this is where we’re getting allspice from. 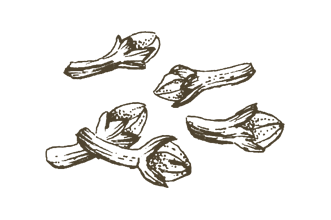 CLOVES
Cloves are a spice with a hot flavor that originated somewhere on the Molucca Islands as early as 1271 BCE. The clove tree is thought to have been imported to China about 2000 years ago. Soon after, its popularity spread over the entire European continent. Cloves have great analgesic, antiviral and antibacterial properties which is why they are widely used in the traditional Indian and Chinese medicines. We get the best cloves from the Moluccas, also known as the Maluku Islands. 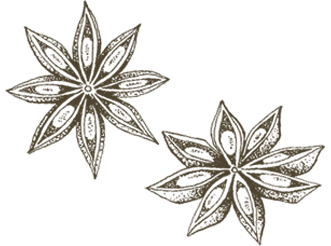 STAR ANISE
Star Anise is a star shaped spice indigenous to China and Vietnam. This spice comes from a small, evergreen anise tree, and it has a taste that resembles fennel, tarragon and licorice. In the past, Mandarins used it as a breath freshener, chewing the entire dry fruit for several minutes straight. Star Anise reached Europe only in the 17th century, and since then it has become an essential ingredient used in cooking. This spice is known for its health benefits having antifungal, antibacterial and antioxidant properties. We import star anise from Vietnam. 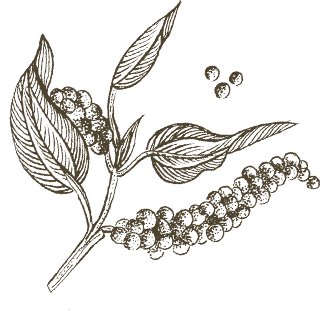 BLACK PEPPER
While pepper originally belongs to South India, it's grown in other tropical countries as well. It's played a vital role in history, and has been considered as an important spice from time immemorial. In ancient Greece , it was also used as currency. To make black pepper, the peppercorns must be plucked just before ripening, left to ferment and then dried until they shrivel and turn black. For Molina Chai we use the Malabar black Pepper from India with its mildly dark, slightly bitter flavor. 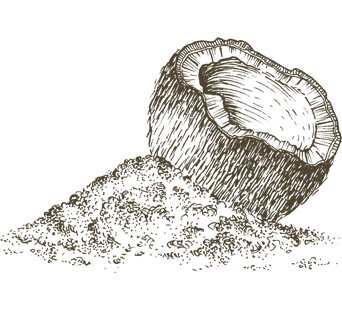 COCONUT BLOSSOM SUGAR
Coconut blossom sugar, also known as palm sugar or coco sap sugar, is a natural sweetener that has a very sweet and caramel like taste. This sugar that is made from the coconut palm’s sap of cut flower buds is what has been used for ages in the regions of Southeast Asia, and is now getting more and more popular all over the world. We make sure we only use organic natural sweetener coconut blossom sugar that has a plethora of health benefits to offer. We make sure we import the best organic coconut blossom sugar from the world’s largest producer in Indonesia. 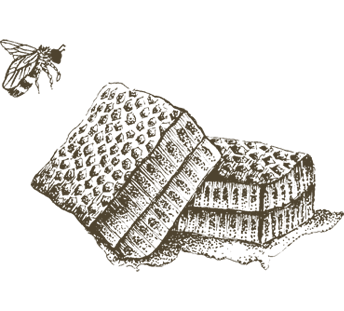 HONEY POWDER
Honey is a natural sweetener that originated somewhere in Southeast Asia and tropical parts of Africa. It traces back to 5,500 BCE when Egyptians used honey not only as a sweetener but also as a present to their Gods and an indispensable ingredient in beverages, medicines, etc. The Greeks used it as a healing medicine for the sick whilst Romans, discovering its great culinary properties, incorporated honey into dishes.The importance of honey continued to grow until the Renaissance, yet it became less used after sugar production began. We use premium quality Canadian honey in all our Molina Chai products. 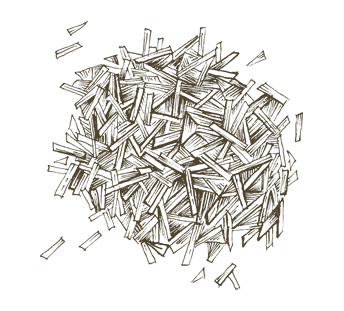 SANDALWOOD TEA
Sandalwood is the second most expensive tree in the entire world with an incredibly aromatic fragrance which is woven into the heritage of India. Its taste is described the following way – “Menthol on the inhale, and sandalwood/incense on the exhale”. Its history is 4000 years old and is mentioned in many Chinese and Sanskrit manuscripts. The essential oil developed in its roots and heartwood has long been used in spiritual rituals, and nowadays it is believed to have phenomenal spiritual, psychotropic and medicinal properties. Sandalwood essential oil also plays an important role in Buddhism and is considered one of the 3 incenses integral to Buddhism practice. 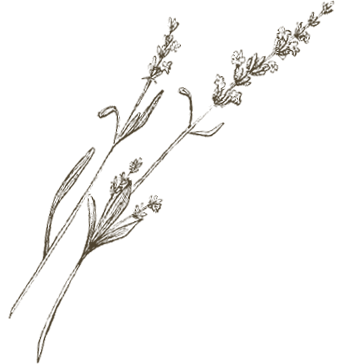 LAVENDER
"Lavender is the soul of Provence" - Jean Giono. Lavender is a fragrant herb that originated somewhere in the Mediterranean, India and the Middle East. This flowering plant of the mint family dates back 2500 years ago. Ancient texts suggest that the Egyptians used it as a perfume and the Romans used it to scent the air, baths and their hair. It is also believed that lavender essential oil is one of the holy herbs used in the preparation of the Holy Essence and Nard, also known as Spikenard. Today, the healing properties of this aromatic herb are well-known in the world, and that is why we make sure we import it from some of the most fragrant lavender fields in Provence, France. 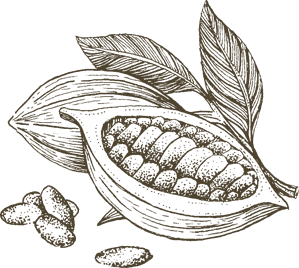 COCOA
The origins of Cocoa date back to Aztec civilization in 2000 BCE, today it is grown in Mexico and Guatemala. The Mayans and Aztecs consumed Chocolate bitter and often added chilies. The common people used it as a spice, while royalty drank it straight and bitter. In Latin America, Cocoa is often used in its original role, as a bitter spice. Cocoa is known to have therapeutic properties of calming the senses by releasing the “happy hormones” in the body.

BOURBON VANILLA
Bourbon Vanilla is a sweet spice with a smooth and strong fragrance, the second most expensive after saffron, that comes from an orchid that grows up trees. It originated somewhere in Mesoamerica, however nowadays it is produced all over the world. The ancient Totonac Indians of Mexico were the first ones to use the flavorful vanilla pods in their cooking. Soon after, vanilla beans were introduced to Aztecs, and later on to the world. These days, the world’s largest production of Bourbon Vanilla comes from the Bourbon Islands in Madagascar, hence its name, which is where we import it from. 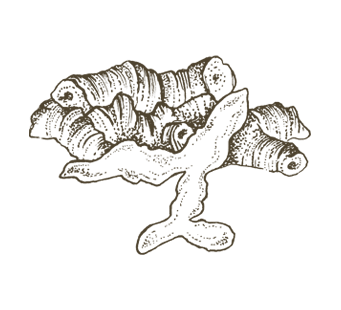 GALANGAL ROOT
Galangal root, also known as blue ginger, is a typical ingredient used in Thai cuisine that has antispasmodic and antibacterial properties. This spice originated in Indonesia, and over time has become truly valued in the world for its health benefits and a sharp taste that resembles a pine like aroma. In Thai culture, the galangal root, known as “kah”, is believed to have magical powers. Therefore, this spice is considered to be a natural aphrodisiac besides its other great benefits for emotional and spiritual balance. We import our galangal root from Thailand. 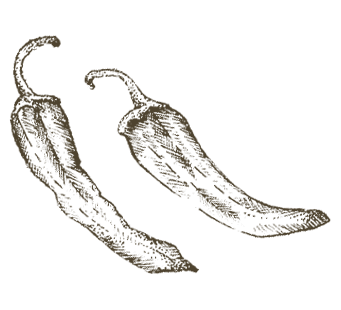 CHILI PEPPER
Chili peppers have been a part of the human diet in the Americas since at least 7500 BCE. Christopher Columbus was one of the first Europeans to encounter them, and called them "peppers" because they, like black and white pepper of the Piper genus, were already known in Europe. The chilli pepper is the fruit of plants from the genus Capsicum, a member of the nightshade family that includes tomatoes, potatoes and eggplants. 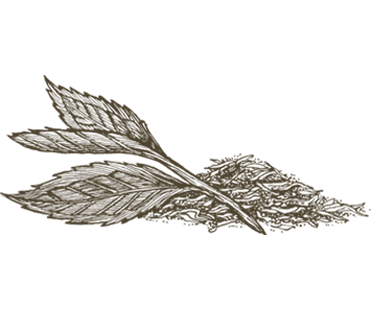 BLACK TEA
The unique taste of the Mesoamerican Molina Chai combines authentic Indian spice blend with a hint of lavender and the nutty flavor of almond extract. A fine explosion of many tantalizing tastes formed, reinforced by another important ingredient; cocoa, being lifted to the palate by the subtle spiciness of the Chile Pepper on the tongue.